A History of Common and Civil Law in Canada 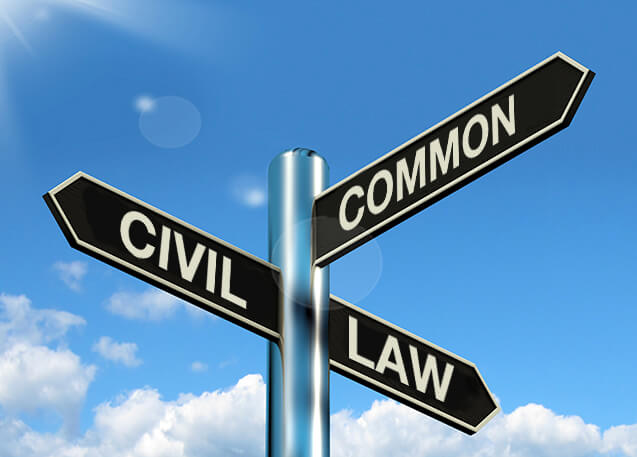 Konrad Bongard, freelance columnist for Pardon Applications of Canada, provides insight into the historical differences between common and civil law in Canada, and suggests that English Canada may do well to consider trending toward the economic and legal policies of civil law nations, including Quebec.

Unlike the vast majority of countries in the world, Canada has a bijuralist system, meaning that two different forms of law exist.

In English Canada, a common law system exists, whereby judges assess cases on the basis of available rulings made in the past, giving preference to rulings made by higher courts. In Quebec, a civil law system exists, whereby judges primarily base their decision on a formalized civil code, the current version of which came into existence in Quebec in 1994.  Given the relative complexity Canada’s bijuralist system, it will be worthwhile to briefly explain the history of these two systems, as well as the potential implications they have for the provinces in which they’re applied.

Common law is originally a peculiarly English development. Prior to the Norman Conquest in 1066, different laws applied in different regions throughout the country.  After 1066, however, Justices began to formulate a common law system drawing on different legal custom and rulings that had been made in various regions. These rulings were never officially written down, and are therefore “precedential”  — for a judge to make a ruling, he has to look at past legal decisions that have been made and (in theory) appeal to them, and has no centralized code to appeal to.

Also important to mention is that, unlike civil law, common law tends to reflect the more individualistic disposition of Anglo-American societies. This can be traced back to the 1215 Magna Carta and its guarantee of inalienable rights, as well as its tripartite separation of powers into the legislative, executive, and judiciary.

Nowhere is this individualist focus more evident than in the constitution of the United States, in which the famous statement that “We hold these truths to be self-evident, that all men are created equal, that they are endowed by their Creator with certain unalienable Rights, that among these are Life, Liberty and the Pursuit of Happiness” essentially functions as an individualist credo. And while common law may have begun in England, today it has spread far and wide.  According to the CIA World Factbook, 80 countries use it, including India, the United States, Australia, and in large part, Canada.

Civil law has quite a different history.

In 1804, Napoleon (seeking to radically modernize France, which had arguably fallen behind intellectually and socially compared to Great Britain) created the Napoleonic Code, which derived its inspiration from rules issued by the Roman Emperor Justinian in the 6th century, as well as their later rediscovery in 11th-century Italy. The ideology of the Napoleonic Code is decidedly different than that commonly employed in the constitutions of common-law nations. Unlike the American individualist focus, the French code is based on the principles of “Liberté, Egalité, Fraternité”, and establishes the state, not a historical aggregate of judges, as the primary law-maker for society.  As such, judges appeal directly to the code (the state) when they assess cases, which is endowed with a legitimate social engineering function.

Important to remember is that the French Enlightenment zeal for rationalization was not limited to their civil code.  It has also bequeathed to us our decimalist metric system (the French even tried to implement a decimalist calendar!), as well as more generally the concept of “universal human rights” which is the clear pretext for the creation of an organization like the United Nations. Nor is France the only country with a civil code. After the Napoleonic code was implemented in 1804, a swath of European countries followed suit in creating their own, perhaps the most historically important of which is Germany’s 1900 civil code (this code is also overtly communalist). Today, 150 countries use the civil law system — almost twice as many as use common law.

So how does this relate to Canada? Before the Treaty of Paris in 1763 which ceded New France to Great Britain, the laws followed in Quebec were based on customary laws established in 1580 for the city of Paris. After English victory over Quebec in 1759, however, English common law technically took hold in Quebec, which led to there being a period of confusion in which French colonists boycotted English courts and resolved disputes using the old French law. This changed in 1774, when pre-Napoleonic French legal codes were rendered official in Quebec (though they still had to follow the English criminal code).

In 1791, Quebec was partitioned into “Lower Canada” (southern parts of present-day Quebec) and “Upper Canada” (Ontario) due to the high volume of English-language colonists who had settled in the southern regions of Quebec. As part of this arrangement, Lower Canada was allowed to retain the French legal system, whereas Upper Canada officially adopted common law. This persisted until 1841, when Upper and Lower Canada were united into the province of Canada (the precursor to the modern nation-state). In this new dispensation, Quebec was allowed to continue using French legal codes. However, to achieve simplification, a commission was formed to draft a new civil code. This commission prepared the Civil Code of Lower Canada (1866) and the Code of Civil Procedure (1867), which were both greatly influenced by their French, post-revolutionary counterpart, and were both in force when Quebec (Canada East) became part of the Dominion of Canada on 1 July 1867.

To understand the consequences of the existence of two legal systems in Canada, it helps to understand how, globally, civil law and common law countries differ.

Because civil law countries tend to view society more as an organic “community” than as a collection of atomized individuals, for instance, these countries (among them Germany, France and Japan) feature a higher degree of interpenetration between government, banking, and private business. In America or Great Britain, corporations are primarily financed via “equity-based financing” provided by competitive capital markets, and corporate assets are more or less continually on the auction block, with their employees similarly viewed as largely disposable.

In civil law countries, by contrast, corporations aren’t nearly as free — they receive the bulk of their financing from universal banks which are in turn often owned jointly by the government.  As a result, “employees are seen as the number one stakeholder, customers number two, and the shareholders a distant number three.”  Notably, because they operate on all four financial pillars — banking, securities, trusts, and insurance – the Quebec-regulated Laurentian Group and the Mouvement Desjardins arguably bear more in common with continental European banks than American or British ones.

Another difference is immigration. Whereas common law countries such as the United States, Canada, and Australia have been relatively successful at integrating immigrants, nations such as Japan, Switzerland, and France (as well as Quebec) have faced more difficulty with the integrational process.

“To understand the consequences of the existence of two legal systems in Canada, it helps to understand how, globally, civil law and common law countries differ.”

A recent example which showcased the difference between English Canada and Quebec occurred in the Quebec election in April, when students at McGill and Concordia from English Canada were denied the right to vote on the grounds that they didn’t meet the criteria of ‘habitual residency’.  Essentially, they couldn’t vote because they weren’t demonstrably intending to stay in Quebec for the foreseeable future!

Optimistically, one would say that Canada — which has frequently been ranked by the United Nations as the most livable country on the planet — benefits from a skillful blending of civil law communitarianism and common law individualism. However, given the stark disparity in wealth between rich and poor, and the consequent effect that demand is often unable to meet the supply generated by technological capitalism, it may be the right time for English Canada to consider hemming closer to the economic policies of the civil law nations (including Quebec), if not necessarily adopting the same legal structures.